When we picked our current property in Mendocino 10 years ago, one feature I really wanted was an open south-facing view, primarily to facilitate later installation of solar panels.

With my first system, I had everything on power strips, a super-high efficiency fridge (SunFrost), and shut thepower down every night. I wanted a system that could accommodate a less power-restrictive lifestyle, and that used PGE’s net metering to store power for us when needed.
Figuring that with the current tax rebates, there was no time like the present, and after consulting with neighbors who’d used Mendocino Solar Service, I called up Bruce. He came out and did a site inspection, and we started the process of designing the system.

We’re about a mile inland from the coast, in the Pygmy Forest area. We don’t get as much fog as the coastline, but a lot more than Comptche.

Bruce was a delight to work with, especially since I had strong opinions of how I wanted the system to operate, after having solar before. I definitely wanted battery backup, not just to help during PG&E outages, but so I had the option to use PG&E only as backup in the future.

We ended up with 28 panels, generating a usable peak of around 8kW, with an Outback inverter, a pair of MidNite Solar battery chargers, minimal battery bank, and a propane generator, grid-tied. 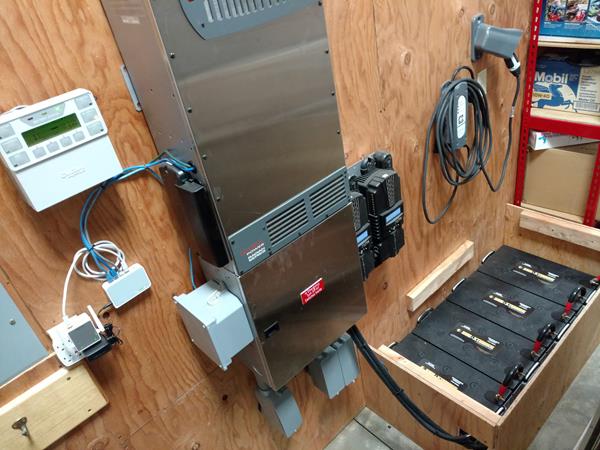 We run the house, charge our Chevy Volt, a beer fridge, a chest freezer, and a hot tub (in the summer), plus my shop equipment and computer. We averaged $350/month for electricity in 2015. We finished our first year with solar November of 2016, generating excess power April-October, with a small negative balance with PG&E!

Adjusting to Time of Day metering (the exact opposite timing for using power than when you’re off-grid) took a little time, but we got the hang of it.

With power outages of less than 4-5 hours, we don’t even know they happened, the system seamlessly switches to and from running off the batteries.

During the recent storms, we had 3 days without PG&E. We ran the generator half of the time we would have before. A slight increase in our current battery bank would even get us through the night with no generator!

We are so happy with the system Bruce and team designed and installed for us. We figured with current power rates, we’re looking at a 6 year payback for our system. As rates go up that moves the payback in even further.

Image: Our solar inverter and monitoring equipment, which will pay for itself in 6 years or less. Photo by K. Wallich.