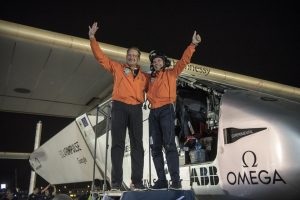 This e-newsletter was launched in July 2013. In the past 3 years we’ve covered a lot of ground, highlighting the many benefits and successes of solar energy in California, around the nation, and across the globe.

With this issue, we take to the sky to celebrate the making of history. At 4am on Tuesday, July 26, 2016 the aircraft Solar Impulse II completed the first-ever zero fuel, solar-powered flight around the world, landing in Abu Dhabi, United Arab Emirates.

This epic journey began on March 9, 2015, and took the aircraft and its two Swiss pilots over more than 24,850 miles.

There were setbacks along the way, which extended the journey by nearly a year.

As he dreamed up this solar powered adventure, Pilot Bertrand Piccard admits he had his fears that his dreams would not be realized. “I was thinking we are completely crazy, the risk of being disappointed, the risk of failure is so high. However, that is adventure. You must be willing to try, to fail, so that you can succeed.”

Just moments before landing the plane, Piccard said: “I can look at the four motors, I can see them energised on nothing but the Sun. I look at it and it is like science fiction, it is like magic, but this is the reality and the future.”

Congratulations to these brave dreamers who made history: Pilot Bertrand Piccard and Co-Pilot Andre Borschberg.

Image: Reprinted from The National UAE.