Recently the US Government, under the administration of President Barack Obama, installed solar energy panels on the White House. But this is not the first time the White House has been solar-powered. President Carter had solar panels installed during his term, only to have President Reagan order them removed two years later, without explanation. Now, clean, green solar energy is back on the job. 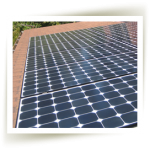