Fact #1: Solar Has Powered an Airplane Across the Pacific

Scientific American reports: “The solar-powered airplane [which flew] over the Pacific Ocean, from Japan to Hawaii, has set a slew of new world records, logging the farthest and longest flights made so far in a solar-powered aircraft. 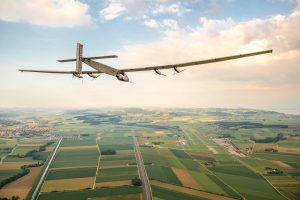 The Solar Impulse 2 plane set the new distance and duration records when it flew 3,519 miles (5,663 kilometers) in 80 hours. The solar-powered aircraft is currently partway through a planned journey around the world.

“Can you imagine that a solar-powered airplane without fuel can now fly longer than a jet plane?!” Bertrand Piccard, chairman, co-founder and alternate pilot of Solar Impulse (the company that owns the plane), said in a statement. “This is a clear message that clean technologies can achieve impossible goals!”