Are You Ready to Power Your Car With Sunlight?

A grid-tied solar energy system will produce energy during the day, being “stored” on the grid for later use. You can charge your car in your garage at night using the energy from the day’s production. Mendocino Solar Service can size a system to provide the amount of “fuel” you need for the car. Or it can be added to a larger system to offset your household usage. Rebates and special PG&E rate schedules are available for car charging stations. Mendocino’s new electricity provider, Sonoma Clean Power, offers all customers a free car charger, regardless of whether they own an electric car or not. One SCP customer reported to us “I just got mine (ordered and delivered within 2 days). They’re worth around $600 and all the customer has to do is pay for shipping and have it installed.” For more information, or to get started on powering your electric car with the sun’s energy, call us at 707-937-1701 or fill out our Consultation Form . 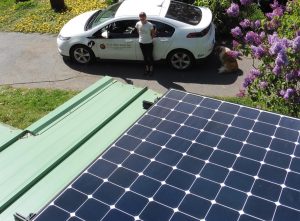 With growing concerns about climate change and the ecological impact of dependency on fossil fuels, drivers are increasingly seeking more environmentally-friendly options than traditional petroleum-powered vehicles. ‘Greener’ car options getting a lot of attention fall in to two general categories: hybrid cars and pure electric cars.

Hybrid cars use a combination of electric motors and petroleum fuels to improve gas mileage. Some “plug-in” hybrid cars have larger batteries to allow some limited all-electric range.

In contrast, pure electric cars can only be charged by plugging in to an electrical source. Thus, with an electric car, you will no longer need to visit a gas station to fill up, but you will need to keep an eye on how much charge you have, and know your options for charging your car on the go.

Despite current low gas prices at the pump, the higher cost of some models, and the challenge of adapting to this new technology, electric cars have become increasingly popular in the United States, including right here in Mendocino County.

At Mendocino Solar Service, over the past two years, we have seen a significant increase in the number of people contacting us inquiring about installing a solar energy system to help power an electric car.

Petra Schulte, pictured above, is an electric-car driver who converted her home to solar energy in the fall of 2014. A big incentive for her family to convert to solar was the ability to use solar power to charge their range-extended electric car, a Chevy Volt. Schulte  and her partner Don Cruser chose a grid-tied, roof-mounted solar electric system, sized to meet both their home and their electric car charging needs.

With on-grid net metering, this family is able to rely on the grid for energy at night or when their system is producing less energy, and then sell back to PG&E the excess solar energy produced by their system on sunny days.

Monthly PG&E statements show them where they’re at with energy production sold to the grid, versus grid energy used. At the end of 2015 they received their yearly “True Up” bill from PG&E, which resulted in them owing only $19.64 for the full year of using the grid as a backup for charging their home and car.

“What I love is that—as soon as our solar energy system was installed—we instantly started saving money on our electric bills. This was such a win!,” said Schulte. “Around here I drive 99% electric, I can get to Ukiah on one charge. Electricity from charging covers almost all of my driving needs—and it almost all comes from the sun! There are only a few times when the generator needs to kick in and I drive a few miles home.”

Smaller solar energy system, either on or off grid, can also be designed just to cover car charging needs.

With new models and new interest in electric cars, electric car charging has been getting a lot of attention. In Mendocino County, California’s State Parks, partnering with Mendocino Land Trust, won a $500,000 grant to install ten electric charging stations at state parks, and two additional stations on local highways.

In addition, a quick web search turned up new electric car charging stations at local bed & breakfast inns and through local city governments, such as the City of Ukiah. And, rebatesand special PG&E rate schedules are available for electric car owners.

Some sources of information: